Gardens offer a much needed ‘touring’ break in Paris

According to Business Insider, after Bangkok and London, Paris is the third most visited city in the world! With incredible museums, endless historical sites, and amazing cafes and restaurants, no wonder close to 18 million tourists will visit Paris this year. Of course, most take photos of the city’s tallest structure, the Tour Eiffel, wander through the beautiful Impressionist collection at the Musee d’Orsay and the even larger Louvre, shop on the Champs Elysées, and gather outside the Cathedral Notre-Dame, to name just a few ‘must-sees’.

With all that walking and touring, breaks are necessary and luckily Paris is also well-known for its Grands Jardins. As luck would have it, Doug and I landed in Paris for October’s unusually warm and sunny weather, and so delighted in visiting them all!

Here are the Top 5…in my order of favourites, starting with…

Dating back to the early 17th century, this Marie de Médicis creation is French classical landscaping at its best. I still have cherished memories of this grand park from when I was 22 while visiting Paris for the first time during a grey and cloudy March. This time the beautiful flowers and crystal blue skies so enhanced the wide open spaces, cookie-cutter trees, immaculate emerald lawns, and the circular pool where children nudge their rented wooden sailboats. 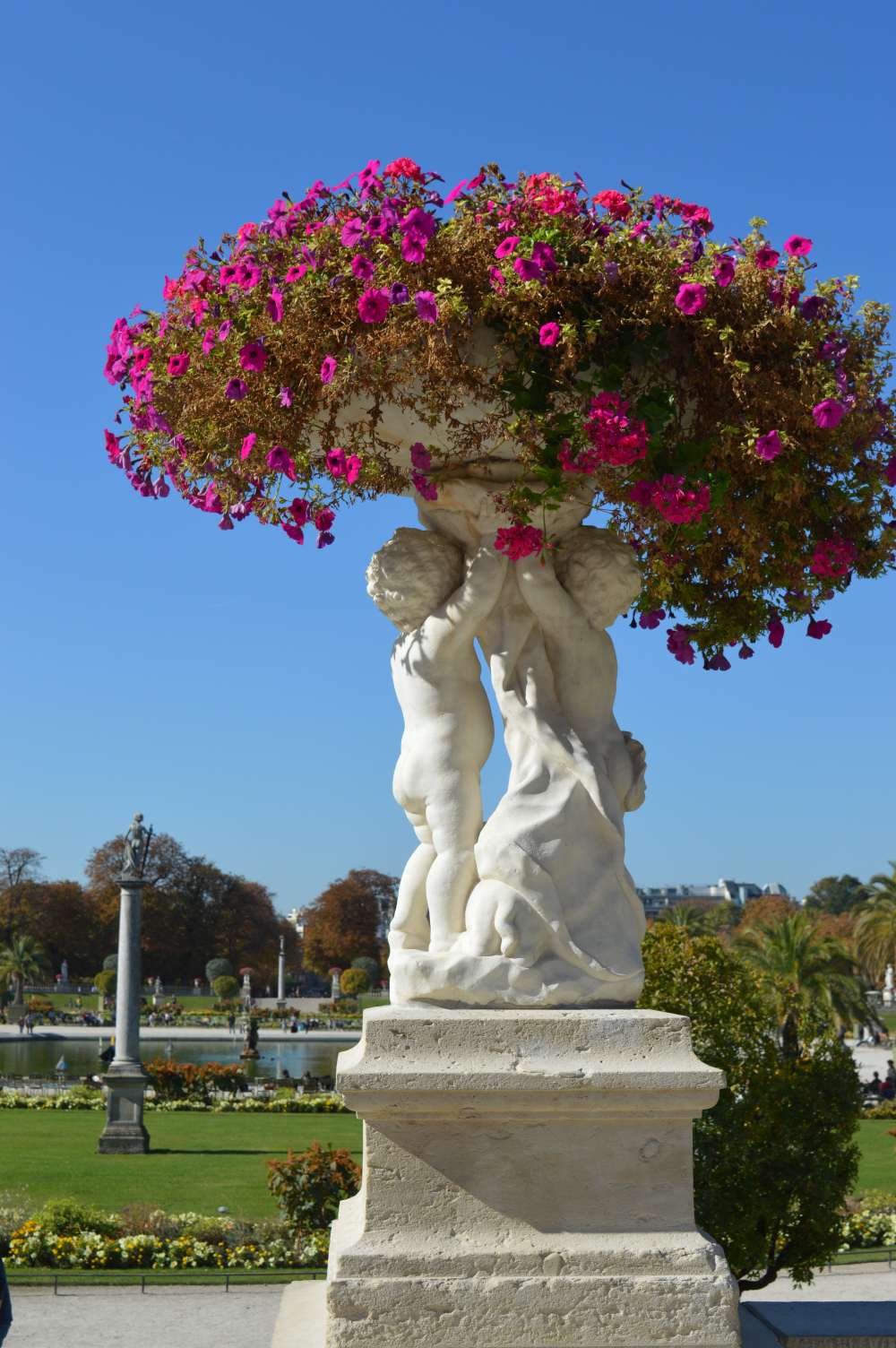 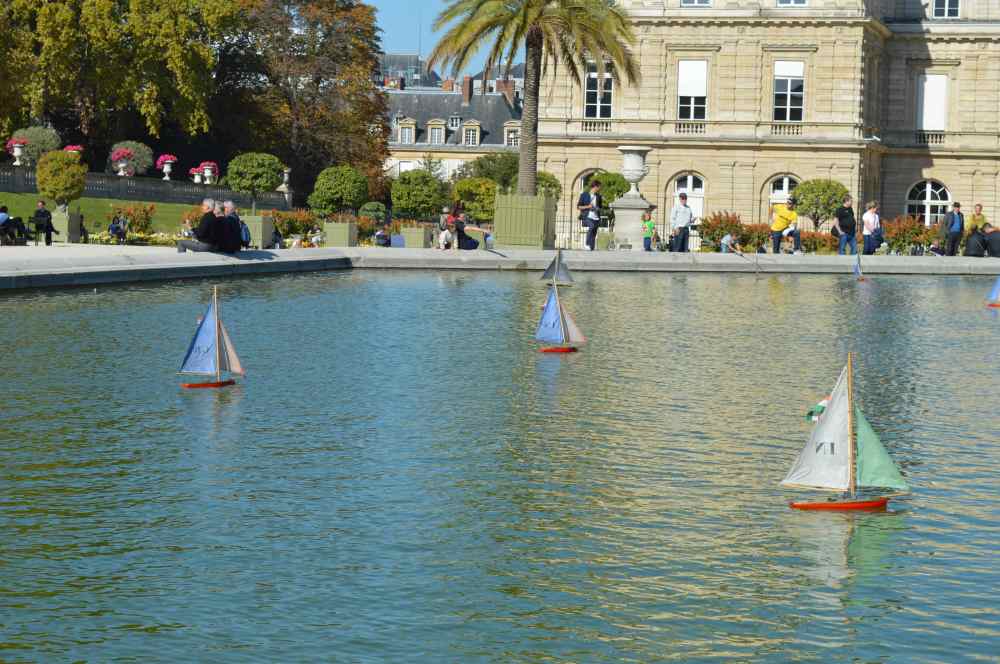 Next on my list of favourites we visited early one morning before the crowds arrived, and our tour of Claude Monet’s Water Lilies at the Musée de l’Orangerie. This grand garden was designed by Andre le Nôtre for Louis XIV. After the king moved his court to Versailles (site of the grandest of gardens!) in 1682, the Tuileries became the place to stroll for stylish Parisians.

As my trusty Fodor guidebook pointed out, ironically the gardens are named after the kilns (tuileries) that fired the tiles made in the factory that used to be located on the site. 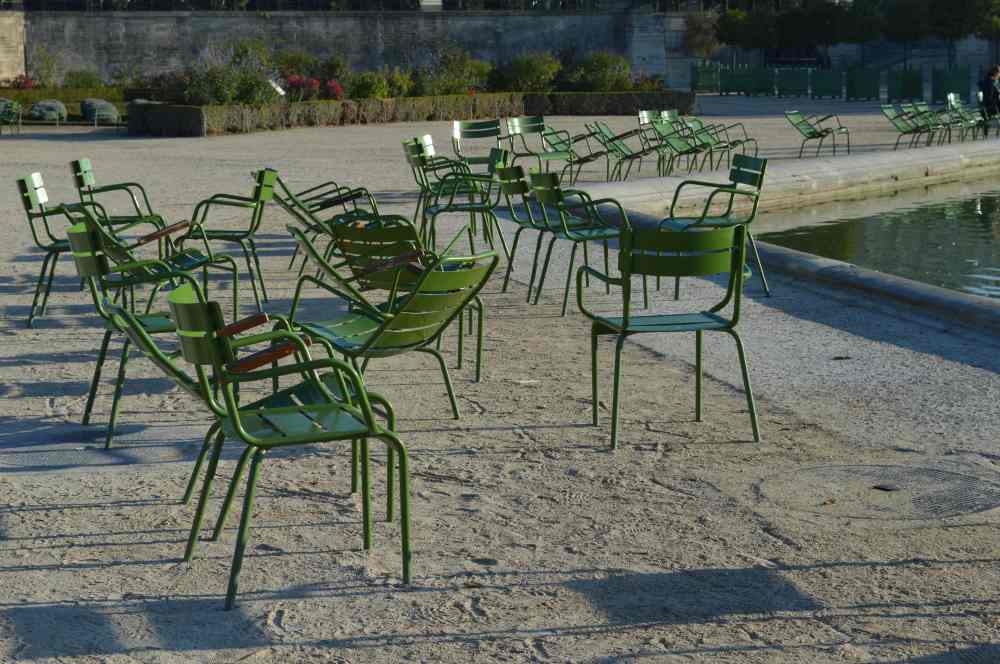 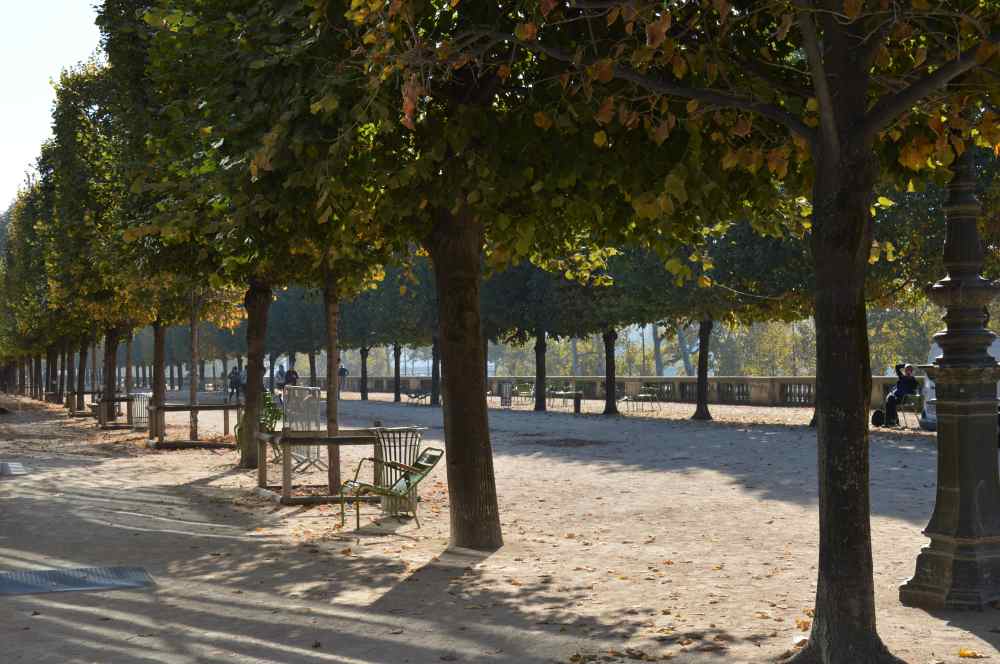 Not far from the Tuileries and tucked away, is the gloriously romantic garden at the Palais-Royal. Built in 1629, it surprised us one day – we hadn’t realized it was enclosed within the walls of the former home of Cardinal Richelieu. I consider it ‘grand’ more for its location than its size. Once a high-society playground known for its decadent late-night revelry, it is encircled by 400-year-old arcades that are now home to boutiques ranging from quirky to chic!

As well, the adjoining Cour d’Honneur (courtyard off Place Colette) is outfitted with an eye-catching (and Instagram-able!) collection of squat black-and-white columns created in 1986 by artist Daniel Buren. 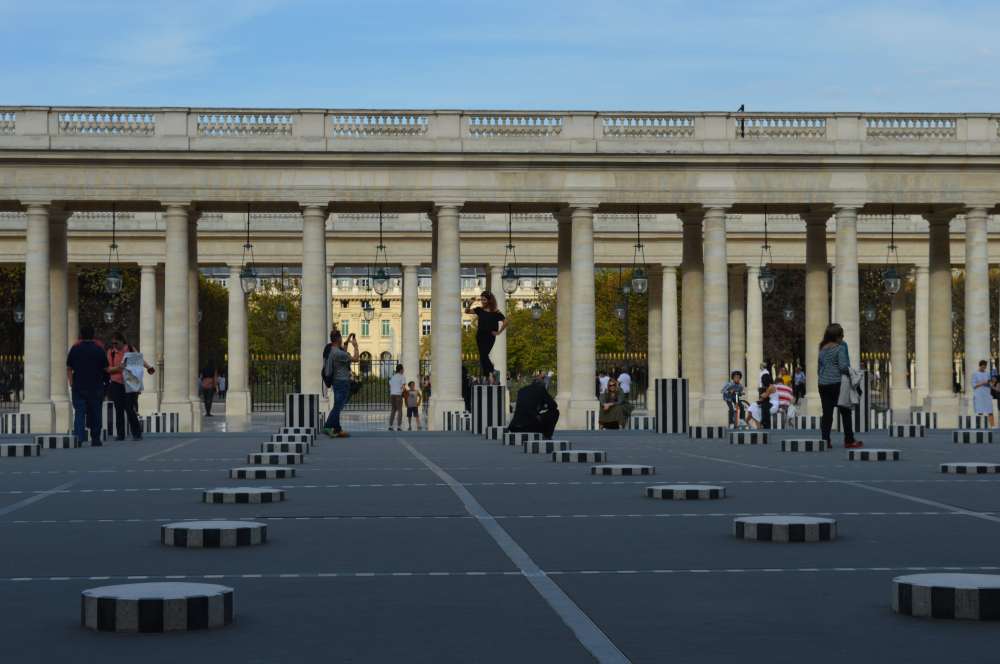 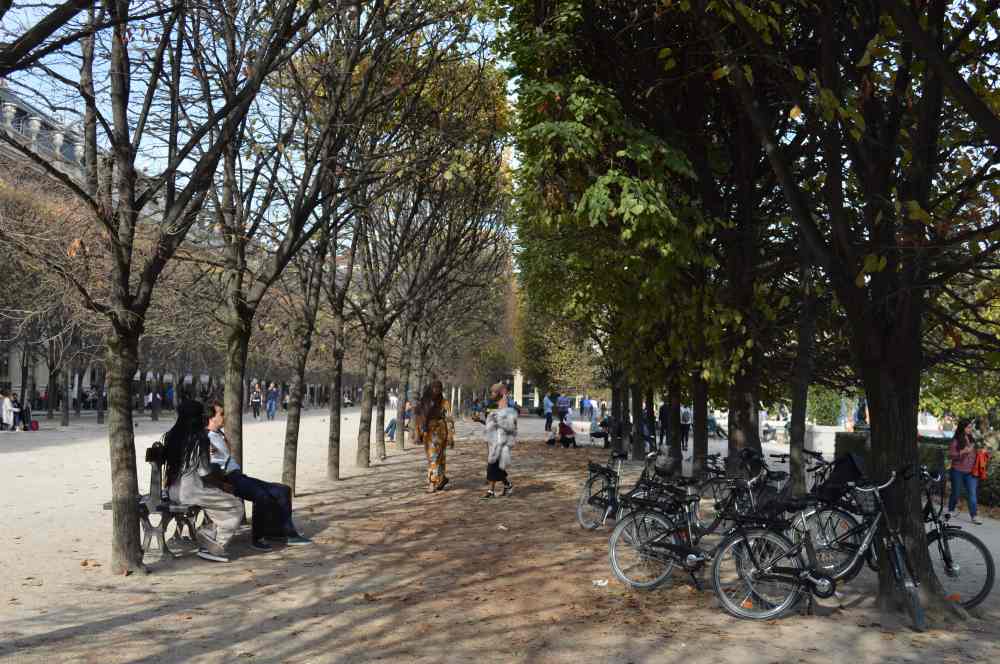 Flanked by the iconic tree-lined paths, this long expanse of grass lies between the Tour Eiffel and the École Militaire. It was the site of the World Fairs in 1867, 1889 (when the Tour was built) and 1900. 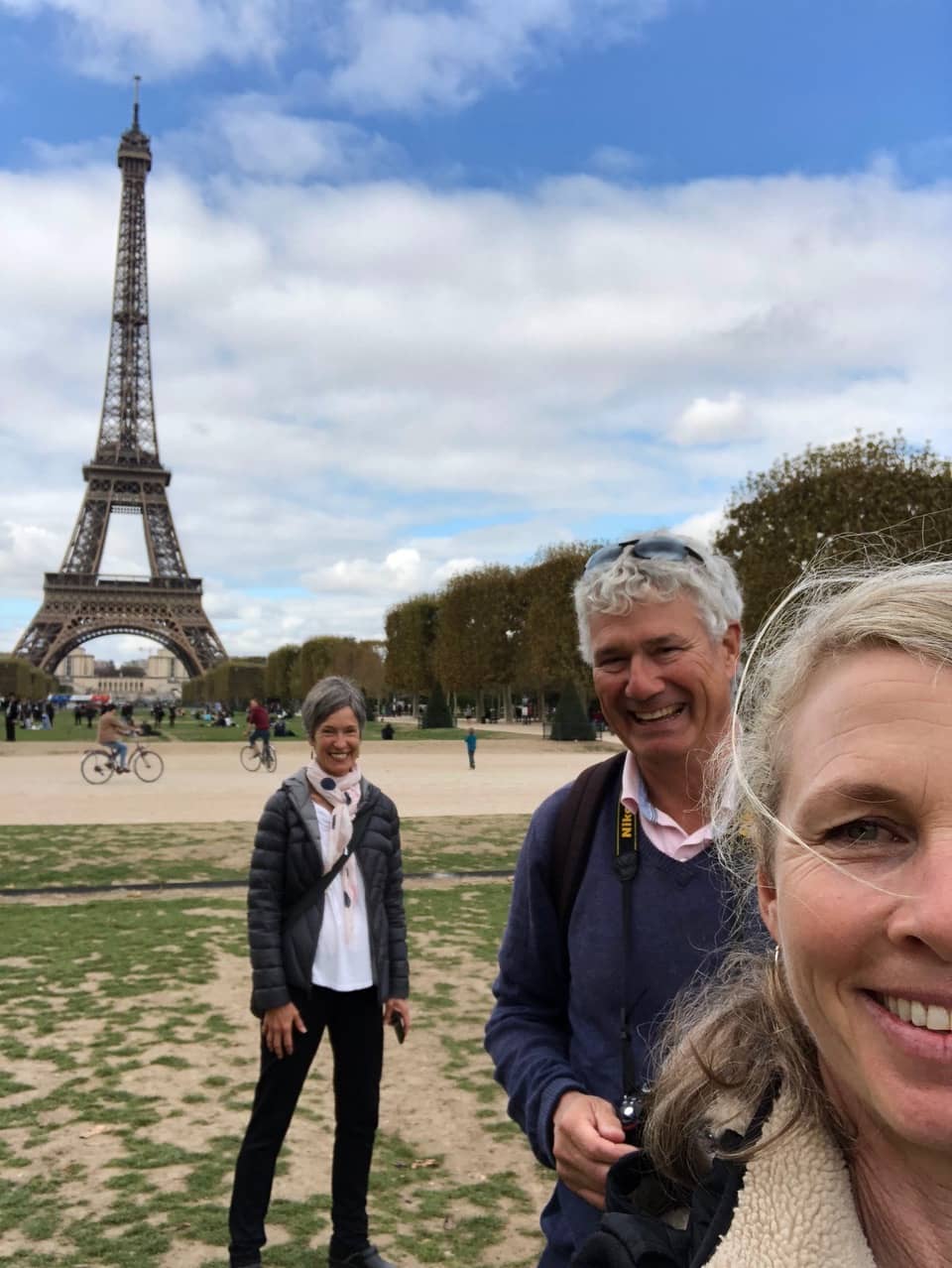 These Botanical Gardens, opened in 1640, were once known as the Jardin du Roi (King’s Garden) and are home to several gardens and various museums, all housed in 19th-century buildings whose original architecture blends glass with ornate ironwork. The botanical and rose gardens were beautiful on our first visit in early October and mostly ‘turned over’ toward the 3rd week. There is also an impressive serre (greenhouse) filled with tropical and desert flora on the grounds. 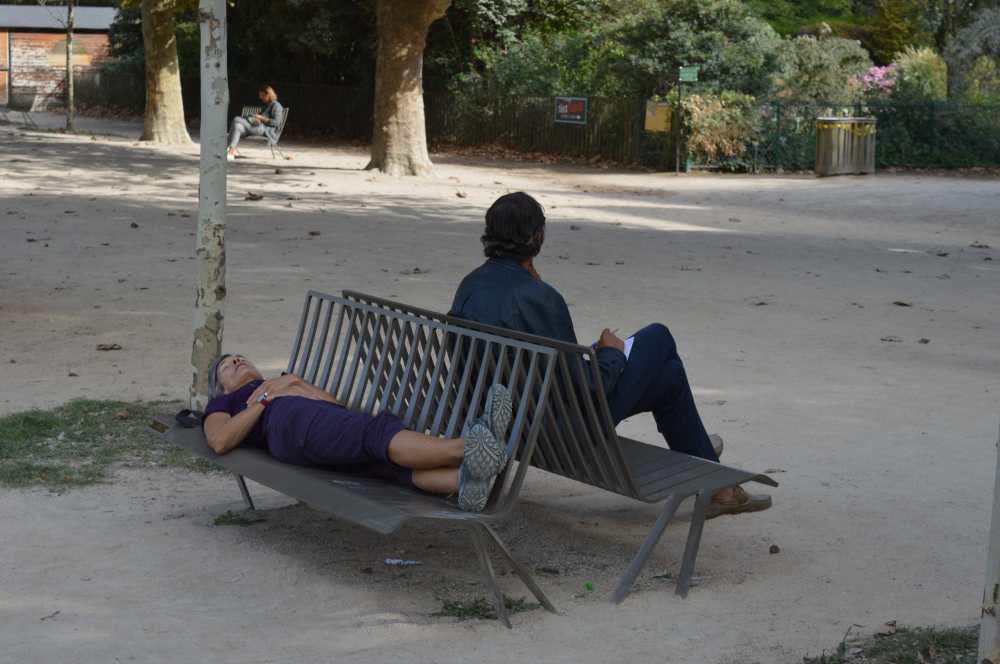 Although we enjoyed well-deserved respite in these grand gardens…the unexpected gems for us were the smaller, sometimes hidden, gardens which are the subject of my next post 😉